Previous Next
Are You Planning for Failure? 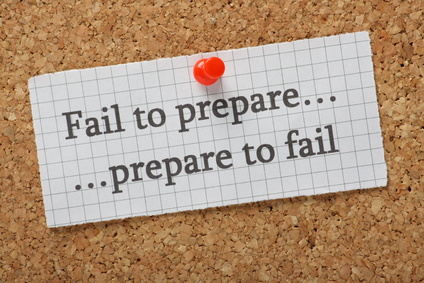 Your business won’t thrive if you expect the worst. Instead, plan for the best outcome and watch it unfold.

Are you planning for failure? I imagine no one thinks they plan for failure; however, I see it happen more than you’d think. Instead, plan for success, and success will follow.

Have you ever called an important contact and were surprised when he/she answered the phone – and you didn’t know what to say? Don’t despair…we have all been there. This is an example of planning for failure on a small scale. As easy as it is to do with this, unfortunately, I also see countless examples of this in everyday work situations.

For example, if you are planning an important meeting, do you plan for success or failure? Do you expect your sponsor to show up to support you? Plan as though he or she will! Even if he doesn’t, run the meeting as though he did. You’ll be surprised how this type of simple action will contribute to success.

The same holds true for if you are planning an event. Do you expect to “fill the house”? Or are you worried if there will be only a handful of people in attendance? Be willing to plan for success. Guarantee food for a full house. Bring the best speakers. Assume you will find a way to achieve success, and you will. What you think will affect whether you plan for success or failure. At my APICS Inland Empire’s first executive panel and networking symposium, we were not sure if we would find enough panelists, fill the audience etc. It was scary as we had to commit funds – and, worse yet, we were concerned as to whether we’d lose face if the event wasn’t successful. Instead, we planned for success, and were thrilled that we had 80 people (four times our previously typical program audience) turn up for an amazing panel discussion.

In another example, if you have a recommendation you feel strongly will help your company, will you plan for success to gain approval? Or, will you not ask to meet with the CEO or Board of Directors because you think he/she is too busy or not interested? Think about your idea. Is it worth-while? If so, plan for success. Be persistent. Bring your peers and manager in the loop. Present why it is a “win” for them – put it in their best interest. Be willing to push for your recommendation, even if you risk hearing “no”. If you do not ask, you will definitely not succeed.

Lastly, in another example, if you know you have a good chance to “win” new business; however, in order to keep it, you have to maintain service levels over 98% which would require spending money not currently approved in your budget, will you? Or will you hold off to try to make both work (win the business and maintain service without spending money), even though the chances are slim? Plan for success. Go to the appropriate people to gain budget approval. Clearly communicate the potential return on investment. Be willing to go to your Board of Directors if required to gain upfront approval. Assume compelling logic will be sufficient. The worse that could happen is that you hear “no”.

It is easy to unintentionally plan for failure. The main way to ensure you plan for success instead of failure is to maintain focused on the end goal. What do you want to achieve? Why? How can you make sure it’s achieved? Develop plans and stick to them. Be persistent. Be bold. Be willing to invest in success. Be willing to ask for help. Plan for success. Success will follow.