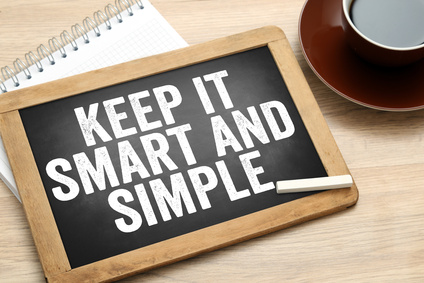 Increasingly, project management is a matter of getting more accomplished in less time. The simplest way to succeed is by using smart and simple approaches.

Why is everyone searching for the latest and greatest technology and fad when common sense will drive bottom line business results? It seems that it is an exciting conversation piece to talk about potentially intriguing technology or concepts such as agile, and so we all get caught up in it. However, when I look across the hundreds of projects implemented by my clients, the key to success boils down to uncommon common sense.

For example, one of my large manufacturing clients is running multiple projects simultaneously. They have been using lean techniques and bringing in consultants who are gurus in utilizing the latest technologies and processes. Of course, none of this is “bad” as results will occur; however, it doesn’t have the same impact as utilizing uncommon common sense.

In one area, there is an overload of work on specific machines which they can see by looking at the visual signals on the plant floor. If you go to the production board, you can see immediately which items and machines are overloaded because they are highlighted and obviously overflowing. After sifting through loads of system data to review the problem through the best and brightest analytical formulas, it was determined that a select few products were best to move to a new production area for focus on improving output.

Not surprisingly, output increased for those items! However, the items were moved to machines which were already overloaded and overflowing, and so although output increased, the already overloaded items were deprioritized for the select few products and past due temporarily increased. Uncommon common sense would say to review the production board which clearly showed this problem or ask the planner to avoid this significant roadblock on the path to success. It seems obvious in hindsight yet wasn’t obvious to the team in the situation – a perfect example of why common sense is not common!

In today’s new normal business environment, project results are of paramount importance as growth and profitability is cornerstone to success. Why not try uncommon common sense to not only simplify your project team’s lives but also to guarantee success. It boils down to becoming ultra-clear on the objectives, taking the step back and setting aside the appropriate time to determine how to simplify the project plan and path forward to only what is essential to success. Rapid progress and an acceleration of results will be your reward.